Personalities of the Celts

Boudicca:
In stature she was very tall, in appearance most terrifying, in the glance of her eye most fierce, and her voice was harsh; a great mass of the tawniest hair fell to her hips.
- Cassius Dio, Roman historian
'Prasutagus, the late king of the Icenians, in the course of a long reign had amassed considerable wealth. By his will he left the whole to his two daughters and the emperor in equal shares, conceiving, by that stroke of policy, that he should provide at once for the tranquility of his kingdom and his family. The event was otherwise. His dominions were ravaged by the centurions; the slaves pillaged his house, and his effects were seized as lawful plunder. His wife, Boudicca, was disgraced with cruel stripes; her daughters were ravished, and the most illustrious of the Icenians were, by force, deprived of the positions which had been transmitted to them by their ancestors. The whole country was considered as a legacy bequeathed to the plunderers. The relations of the deceased king were reduced to slavery.'
- The Annals by Tacitus, IV, 31 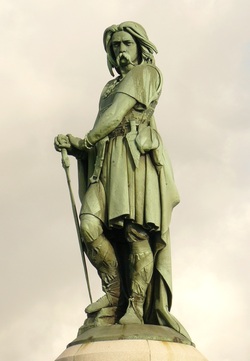 - Gallic Chieftan
- Attepmted to destroy roman expansion but failed, but non the less, his enemy Julius Caesar acknowleges him as being a great warrior
- He was a nobleman of the Arverni tribe who tried to unite all the Gallic tribes to form a cohesive opposition to Caesar.
- used the 'scorched earth' policy, he burnt all tribal towns except for Avaricum as he was convinced to let it thrive, being that it was the finest in Gaul. This method had some gdegree of success as Caesar writes of having problems in supplying his men.
- Caesar eventually captured Avaricum, but failed in obtaining the stronghold of Gergovia.

It came down to the final showdown between the 2 and their respective forces at arms at the fort of Alesia. The Romans surrounded the gallic army who lied inside the fort and the Gallic army then surrounded Caesar's army, finding himself the besieger and the besieged.

Although Caesar was outnumbered, with the Gallic army 350,000 men strong, Casar manage to succed and Vercingetorix suffered a gruesome death after being taken prisnor.